Home>Articles>3D Printed Toys for Tots
All IC3D resources are currently devoted to the COVID response. This may result in longer lead times for non-COVID related orders.
We have also added a NO COLOR PREFERENCE option to be able to ship out orders fast.
FREE SHIPPING ON ALL 3D PRINTING FILAMENT ORDERS IN THE CONTINENTAL U.S. OVER $75!
Previous Next 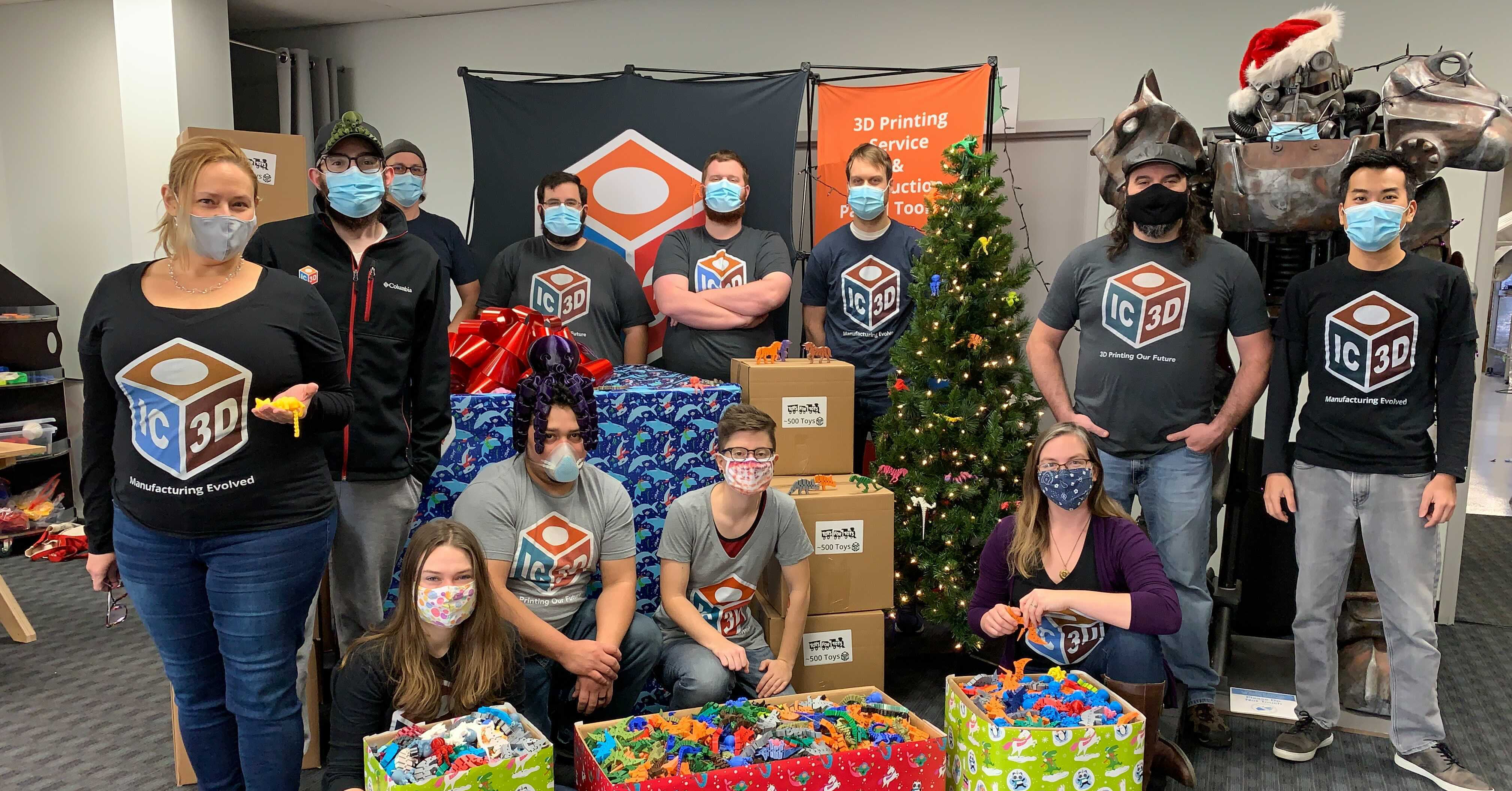 Over the next three weeks, IC3D Industries (IC3D), in partnership with the U.S. Marine Corps Reserve, NatureWorks©, Micro Center©, and The Coca-Cola Company© of Columbus, will distribute over 17,300 3D printed toys for Toys for Tots© across the State of Ohio and three counties in Michigan. Toys for Tots was established in 1947 to bring joy to kids in need. Since its inception, and through partnerships with businesses like IC3D, the Marine Corps Reserve have distributed toys annually, nationwide.

IC3D is proud to work with the Marine Corps Reserve to continue this partnership for the third year in a row, contributing nearly 20,000 toys in total to children in need. 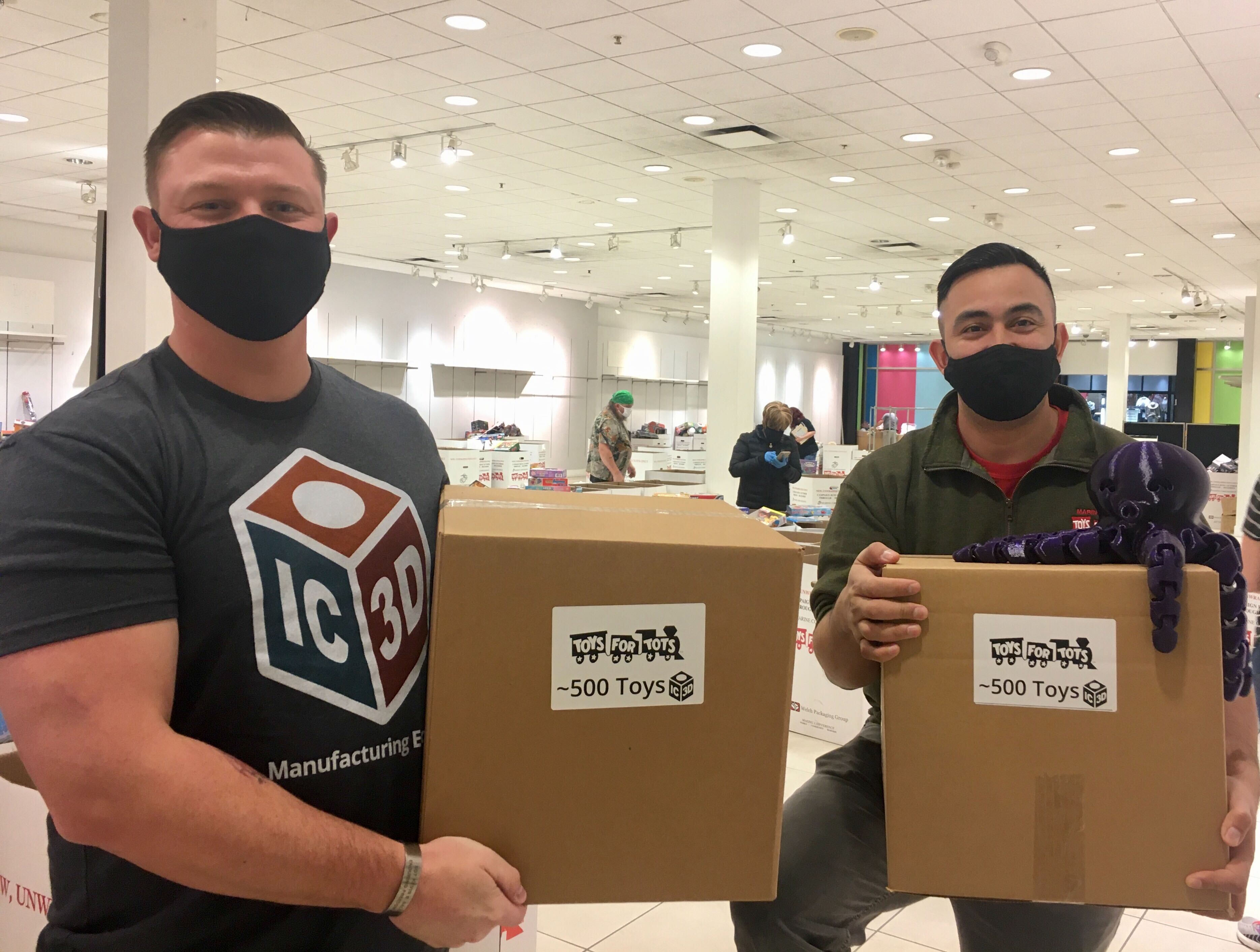 “It is an honor to continue my service to our country by giving joy to kids in need. We accomplished so much this year and I know it has been tough on so many, but being the IC3D 2020 Toys for Tots Ambassador, distributing over 17,300 toys with IC3D and their incredible team has given me a spark of light in this tough time.”

IC3D, a Columbus, OH-based additive manufacturing company, utilized state-of-the-art 3D printers to produce toys out of love for the Toys for Tots program and a desire to support local children in need during the first campaign in 2018. This year, IC3D and 128 printers from across the country produced over 17,300 3D printed toys. Most of the printers are main street small businesses, hobbyists, or one-person shops who use high-tech 3D printers to make almost anything imaginable.

We are humbled by the overwhelming response we received from our volunteer ‘printer elves.’ The 3D printing community have stepped up in a big way. This capacity shows how transformative these new technologies can be; in three years of this campaign, we increased our toy production by 1,000%.

Imagine the possibilities when additive manufacturing and high volume is required and applied to medical equipment, parts for machines, or any other industry. IC3D is excited to showcase how democratizing manufacturing for everyone delivers a rapid result at scale. 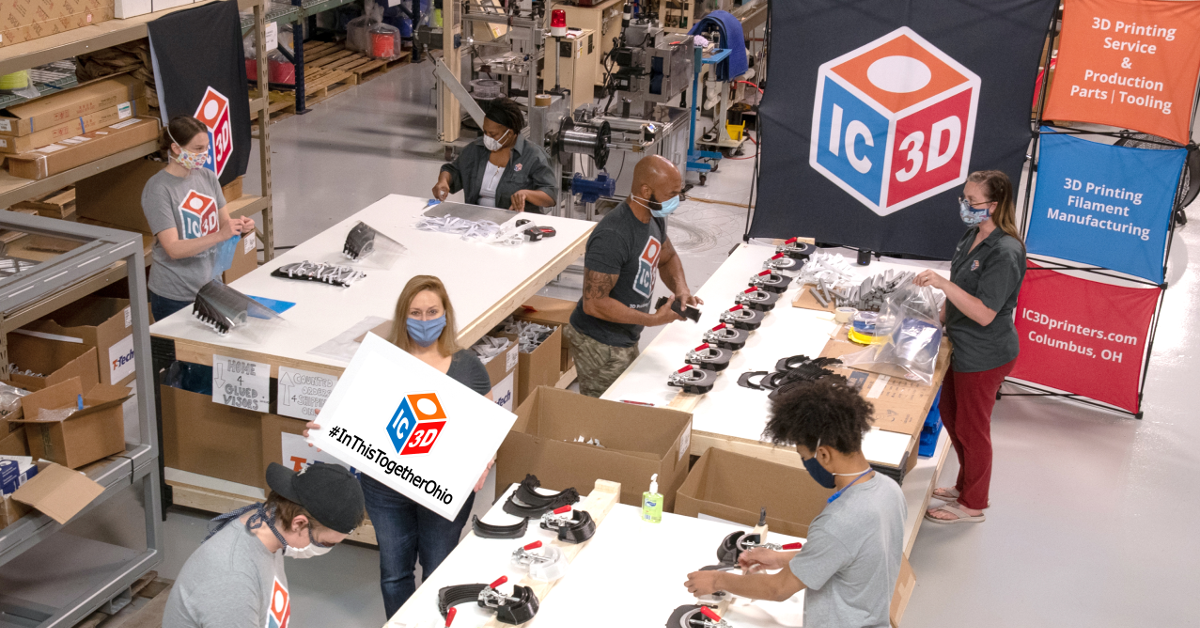 IC3D was assisted by a major contribution from NatureWorks with their generous donation of resin for the Third Annual 3D Printed Toys for Tots  campaign.

We appreciate the opportunity to donate Ingeo biomaterials for the filament used for IC3D’s participation in the Toys for Tots program. These toys will hopefully not only inspire play and creativity, but also demonstrate what’s possible when you combine innovative forms of manufacturing, like 3D printing, with cutting-edge sustainable raw materials. 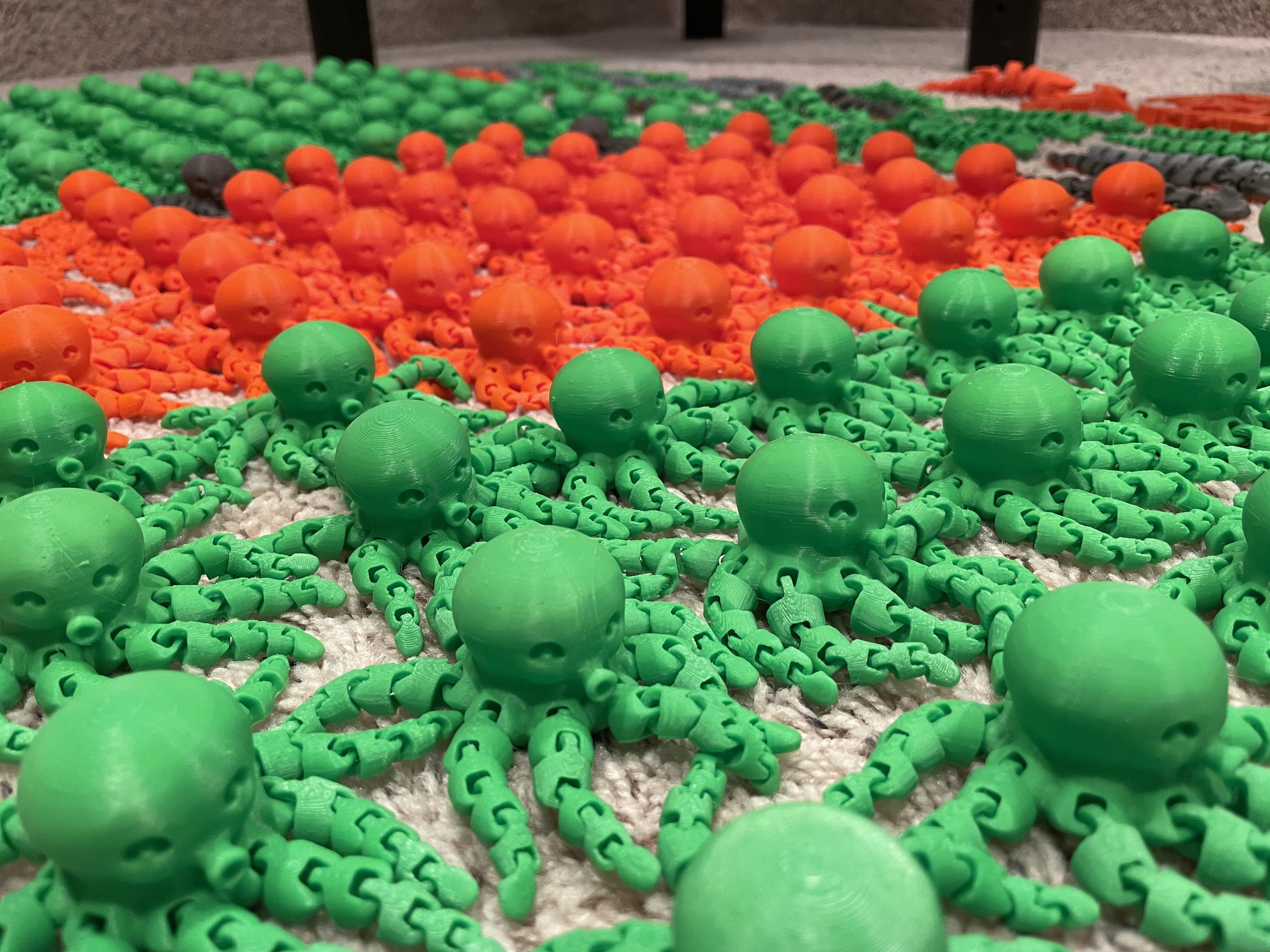 The toys were shipped from volunteer printers to IC3D headquarters for distribution. Every shipment met rigorous health checks based on standards IC3D uses when producing and distributing their products.  This included a new decontamination system called the ATMO produced by Bigger Tuna, a Columbus based product development company in partnership with SMT, manufacturer of Selectrocide, ATMO’s active ingredient. 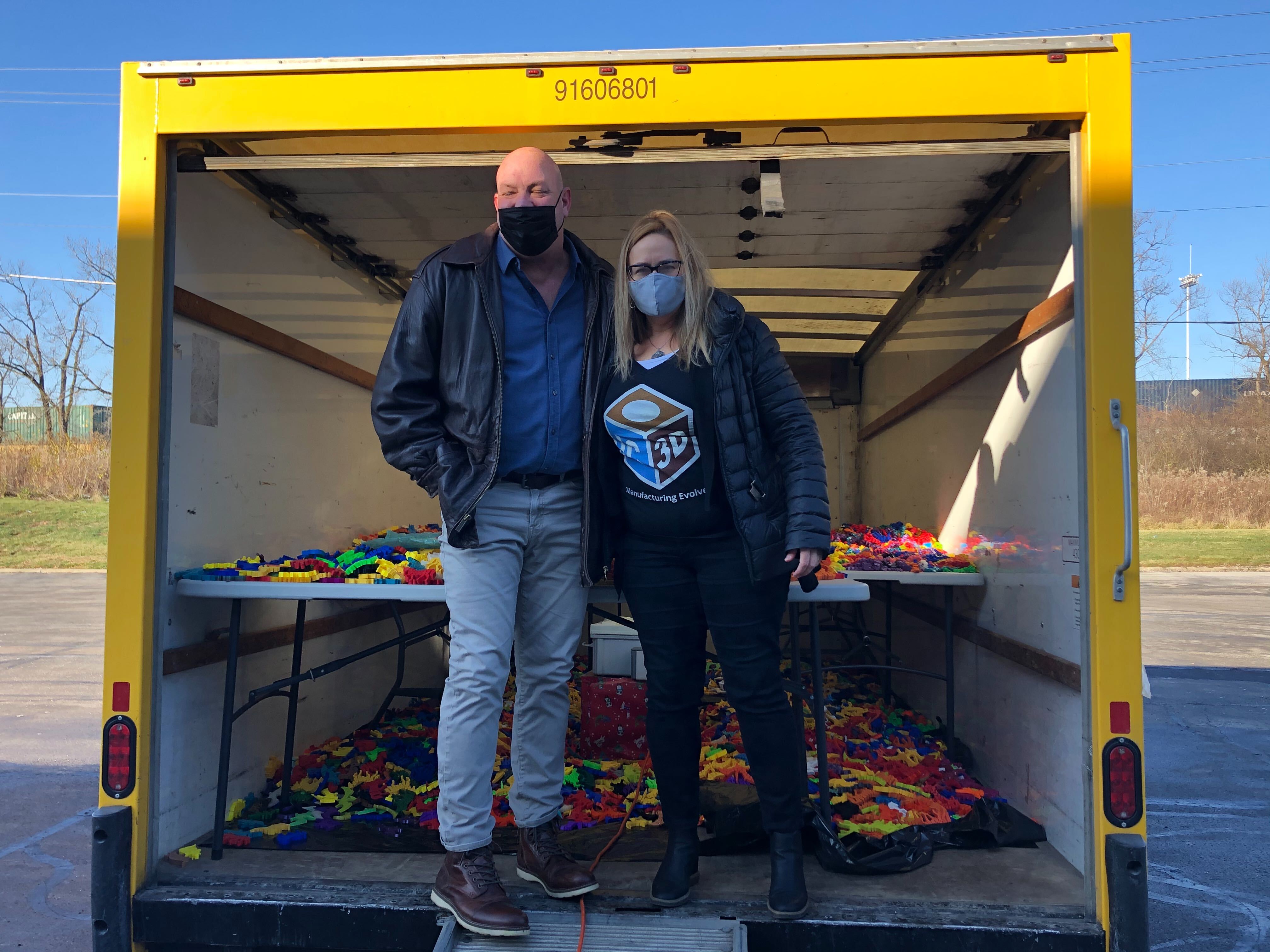 Shipments were quarantined and toy delivery will be contactless. IC3D staff will distribute the toys to military bases and other facilities across Ohio and metro-Detroit personally, ensuring every toy reaches its destination. 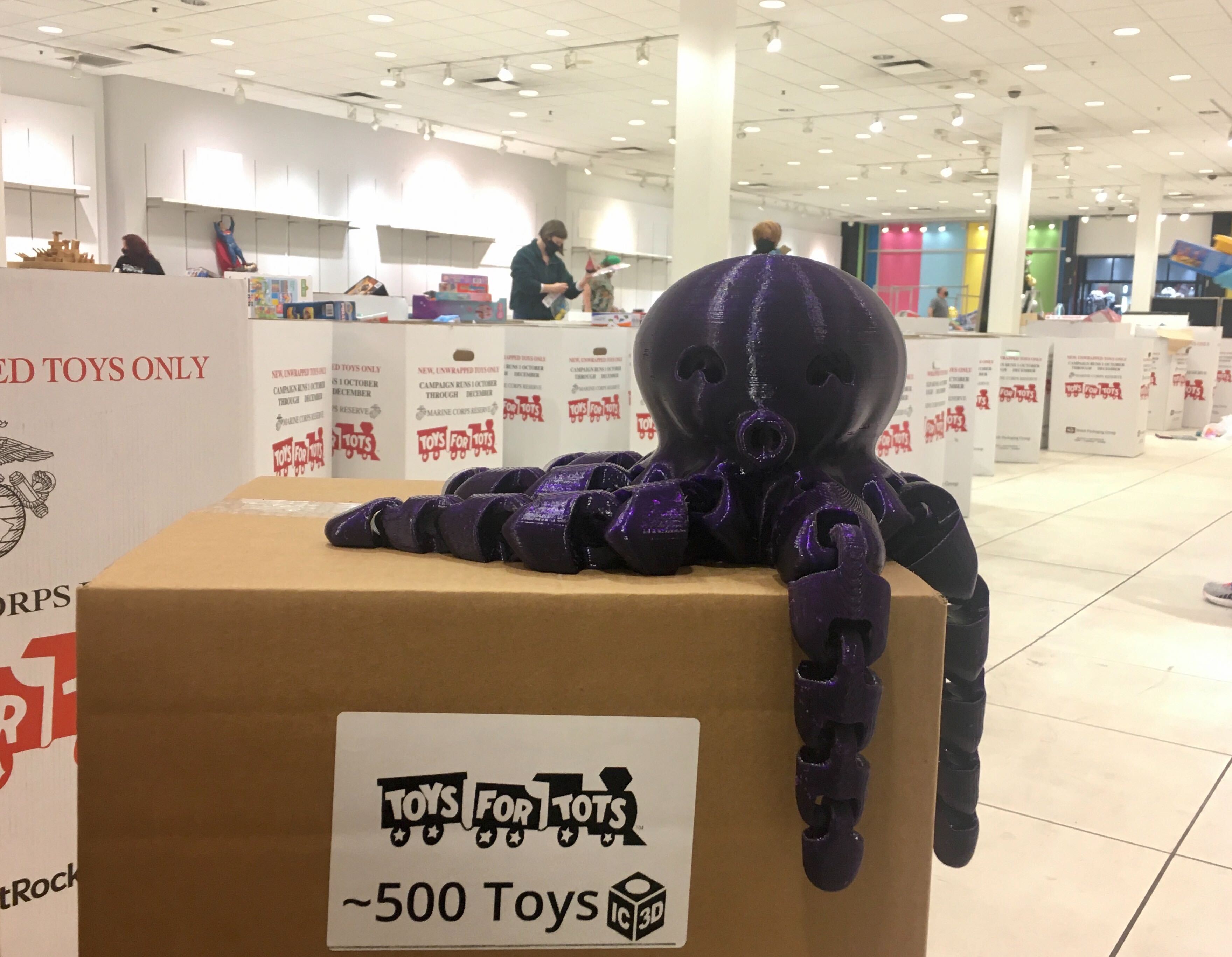 The health and safety of our employees, distributors, 3D Printer Elves, especially the ‘tots,’ and the safe distribution of filament to finished toys is of utmost importance to our company. We learned a lot during this pandemic about how to keep our community and company safe, and will ensure every child has a big smile when they receive their toy.

Between December 10th and December 19th, IC3D will be delivering toys to the following counties in Michigan and Ohio.

Want to donate toys or apply for assistance for the 2021 holidays? Visit ToysforTots.org for more information on your local Marine Toys for Tots campaign.

About the Author: Claudio Donndelinger