Home>Articles>IC3D Printers receives Crystal Award for Excellence
All IC3D resources are currently devoted to the COVID response. This may result in longer lead times for non-COVID related orders.
We have also added a NO COLOR PREFERENCE option to be able to ship out orders fast.
Customers, please note we have increased the amount of filament on the 2.3kg (5lb) spool to 2.5kg (5.5lb) spool and have also increased the price by the same rate. This was done to help standardize our bulk packaging and improve our efficiency. We appreciate your business.
FREE SHIPPING ON ALL 3D PRINTING FILAMENT ORDERS IN THE CONTINENTAL U.S. OVER $75!
Previous Next

Columbus, Ohio – IC3D Printers from Dublin, Ohio has earned the Crystal Award for Excellence from Ohio’s Edison Technology Centers. IC3D Printers was nominated for their impressive work as a startup in the field of additive manufacturing.

Founder Michael Cao accepted the award on behalf of IC3D Printers on March 27 during a luncheon at the Ohio statehouse featuring many Ohio state legislators, executives, and members of other innovative businesses in the Buckeye State.

Each year Ohio’s Edison Technology Centers recognize companies that have found progressive ways to succeed in today’s highly-competitive markets.  Winners of the Crystal Award for Excellence must work directly with one or more of the Edison Technology Centers to qualify. IC3D Printers was nominated by PolymerOhio, which is focused on enhancing the Ohio polymer industry’s global competitiveness and growth. 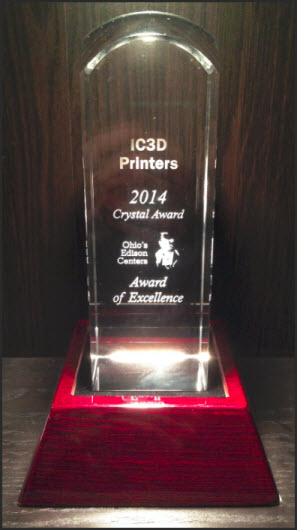 About the Author: Michael Cao